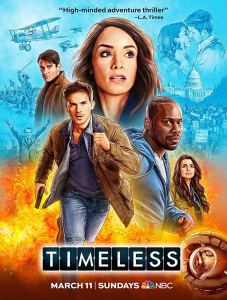 Late one night, a private think tank is infiltrated, and one of the scientists working there is kidnapped, along with the project they were working on. College history professor Lucy Preston is brought to the site of the think tank, where she meets soldier Wyatt Logan, and scientist Rufus Carlin. After being told that a time machine was stolen by a man named Garcia Flynn, Lucy, Wyatt, Rufus are tasked with following Flynn throughout history and attempt to stop him from altering history. When they learn of a secret organization known as Rittenhouse, they eventually team up with Flynn in an attempt to preserve history, and keep the world from being taken over by those at the head of the organization.

A short-lived, yet utterly enjoyable series, Timeless is likely to down as one of those shows that was ahead of its time, and canceled far too soon. With an interesting premise, and an almost unlimited number of historical events and dates to travel to, it would have been interesting to see what would have happened with the show if it hadn’t been cut short, although I do know that two seasons isn’t something to sneeze at when it comes to television series in this day and age. The actors all have good chemistry, and I enjoyed the way they humanized their first season villain and kept him on the show after his main purpose was fulfilled. It was also nice that the network allowed for two more episodes, presented as a TV-movie, to wrap the series up and give a small bit of closure.

The special effects seem to be fairly well done for a network series, and the background filler isn’t noticeable for the most part.

Despite the premise, this show is more of an action/drama that just happens to involve time travel. Anyone who doesn’t mind their action/dramas with a sprinkling of science fiction will likely enjoy this series. It’s easy to watch, and doesn’t require tons of attention for the most part, and the subject matter is light enough to make bingeing easy without the need to take time off every so many episodes. Though I will say again that two seasons doesn’t seem like enough.

Timeless is currently available to stream on Hulu and the NBC app, and can be rented through Redbox or Netflix home delivery, or purchased at any participating store or on-line retailer.
I’m always on the lookout for new things to watch/read, so if you have a suggestion for me, just let me know!