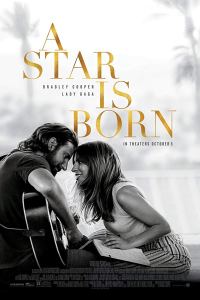 Directed By: Bradley Cooper
Starring: Lady Gaga, Bradley Cooper, Sam Elliott, Andrew Dice Clay, Rafi Gavron, Anthony Ramos, Dave Chapelle, Greg Grunberg, Drena De Niro, et.al.
Rating: R
Grade: A-
After barely making it through a sold-out concert, down on his luck rocker Jackson Maine heads to a Los Angeles drag bar where he meets Ally, a struggling songwriter who performs at the bar part-time.  After spending the evening getting to know her, Jackson invites Ally to his next concert in Las Vegas, where he invites her on stage to perform one of her songs.  When he finally convinces Ally to perform one of her songs solo, her career takes off, and what ensues is a volatile, passionate romance as they both try to balance out Ally’s skyrocketing career with Jackson’s own failing one.
An emotional roller coaster almost from start to finish, this most recent remake of the classic film is an incredible feat for first-time director Bradley Cooper to have taken on, and he manages to make a beautiful film worthy of the nominations it received.  The chemistry between Cooper and Gaga feels real and natural.  Lady Gaga’s inexperience as an actress seems to have worked well in her favor here, because it conveys into a character discomfort with the sudden limelight she finds herself in, and while Cooper is not a professional musician, he does a more than adequate job in singing for his character.  His character’s relationship with his brother, played by Hollywood staple Sam Elliott, is one of the central relationships in the movie, though it probably should have gotten focus than it did.
Most of the effects used are background filler and not noticeable.
So long as you don’t mind emotionally exhausting dramas, you should enjoy this movie.  It’s adequate pacing lets the audience absorb the information before moving forward, and you find yourself truly caring about the characters as endure their struggles.  And, while it may not be something you want to watch on a weekly basis, it is likely that you would want to watch it again, and it shouldn’t begin to grate on those repeat viewings.
A Star is Born is currently free to stream through Hulu, and can be rented through Redbox or Netflix home delivery, or purchased at any participating store or on-line retailer.