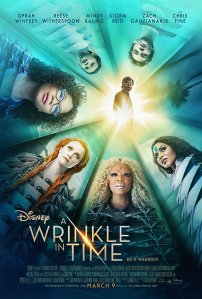 A Wrinkle in Time

Four years after the sudden disappearance of her scientist father, Dr. Alex Murry, Meg is still deeply affected by his absence. One night, a strange woman calling herself Mrs. Whatsit that her brother, Charles Wallace, claims to know appears in her family’s living room and tells them all that Dr. Murry’s theories about tesseracts are correct before disappearing again. The next day, Charles Wallace brings Meg and a classmate of hers, Calvin O’Keefe, to meet another strange woman, Mrs. Who, in a seemingly dilapidated house. After learning that they are meant to be warriors of light and to embark on a journey to find Meg’s father, they meet Mrs. Which in the Murry’s backyard, who tessers them to a distant planet to begin the journey to find Dr. Murray and defeat the darkness, called the It, which is rising in the universe and trying to destroy all light.

First things first, I haven’t read the Madeline L’Engle book that this movie is based on. Though, from the few things I’ve skimmed, that may be a bit of a blessing. I am largely unaware of the changes made from the source material, and therefore can’t comment on them. One thing I did notice was how off the pacing was. The movie seemed to go from 0 to 100 without allowing the story to progress naturally. It seemed that they wanted to get to the search for Meg’s dad as quickly as possible, and would then back-fill as they deemed fit in oddly-placed flashbacks. The story itself seemed to have potential (I’ll have to obtain a copy of the book to read), and the acting was decent. I’m not a huge fan of Oprah Winfrey, but she wasn’t in enough of the movie for it to make much of a difference in my opinion. The acting was pretty good, and the actors playing the kids will probably do well in the future.

The effects are all well done. The alien worlds have brilliant colors that contrast nicely with the somewhat muted colors shown on Earth. The background filler is unnoticeable.

As long as you haven’t read the book, I’m sure that this movie is at least tolerable. As stated before, the storyline has potential and the visuals are interesting to look at. Younger children would like it, and if they really want to see it, it would probably be worth it to rent.

A Wrinkle in Time is currently available free to stream through Netflix, and it can be also rented from Redbox or Netflix home delivery service, or purchased from a participating store or on-line retailer.

One thought on “Wrinkle In Time”