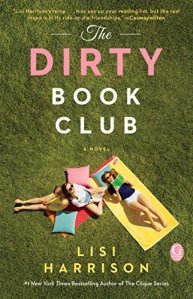 M.J. Stark thinks she has built the perfect life in the wake of losing her mother, father, and sister in a tragic accident. She has a gorgeous doctor boyfriend, a fantastic Manhattan apartment, and is a shoo-in to take over running New York’s City magazine when her boss retires. However, when her boss informs M.J. that, due to her asocial way working, she’ll have to share her promotion with another coworker, M.J. impulsively decides to take her boyfriend up on his offer to join him in California. After weeks of self-pity, M.J. decides to bring a thank you gift to a neighbor after Dan, M.J.’s boyfriend, borrows their patio furniture while they’re out of town. There she meets Gloria, a sassy older woman with a taste for strong martinis and juicy gossip. After Gloria’s husband dies suddenly, Gloria decides to pack up and move to Paris in honor of a decade-old pact with her friends, leaving M.J. alone and friendless. Then, shortly after Gloria leaves, M.J. is sent an invitation to a secret club, along with a date and time for her first meeting. When she arrives, M.J. meets the other members: Addie, a women’s clinic nurse with a healthy sexual appetite; Britt, an overworked mother of two who’s tired of husband’s lack of interest in her; and Jules, a hopeless romantic who’s blissfully ignorant of her husband’s affairs with other women. Together they learn the purpose for the club: to read quote/unquote dirty books and cultivate a lasting friendship. Intrigued, the four women decide to give the club a try for the summer before returning to their own, hectic lives. However, as the group begins reading the selections and the letters the original group wrote to accompany them, they find they have more in common than they originally though, and learn that sometimes the strongest friendships are forged in the most unusual circumstances.

While author Lisi Harrison usually write for the YA set, her adult novel debut is solid. Her characters are well-developed, including the original club members, whom we mostly learn about through the letters they wrote to accompany the books. While M.J. is clearly the main character, the book is written in the third person and rarely deviates from her, though it would have been interesting to read firsthand what we learn about as the information is being relayed to her.

Chick lit is usually a safe bet for authors, as there are many who enjoy a light, simple read. I was able to finish the novel in a little over a morning without missing any of the information. The plotline manages to hold your interest and doesn’t read like it was originally meant for teenagers.

Anyone looking for a fun, easy read who doesn’t mind books gear towards women should enjoy this. It’s a little jarring in the beginning to start with Gloria and her friends and then jump over to M.J. I spent a little time wondering if M.J. was somehow related to one of the original club members until I figured out that she wasn’t, but aside from that, the book is easy to follow.

Check your local library or bookstore for availability, or purchase through any participating on-line retailer.