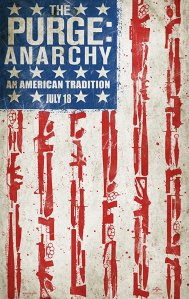 In the second installment of the Purge anthology, we see the lives of five individuals intersect as they all find themselves out on the streets and exposed during the dangerous holiday. Shane and Liz are on their way home from a visit with Liz’s sister, and their car breaks down. Unable to get a tow so close to the commencement of the Purge, they decide to continue the rest of the way home on foot, but quickly realize they’re being pursued by a group of individuals they encountered earlier in the day. Eva and Cali, a mother and daughter, are rescued from a dangerous neighbor by a group of masked strangers, only to be forcibly removed from their home by their rescuers for another man, referred to only as Big Daddy, to kill. They’re saved by Leo, a man on his way to the home of the man who killed Leo’s son in a drunk driving accident who was released on a technicality. Shane and Liz, who have managed to evade their pursuers, find Leo’s car and take temporary refuge in it. After Leo returns to his car with Eva and Cali in tow, he makes a deal with the four of them to take them someplace safe where they can wait out the rest of the night and he can continue on with his mission. Together, the five of them evade both sets of pursuers in the hopes of finding sanctuary with one of Eva’s friends, and when things begin to go awry, they all must fight together to survive the night.

As far as sequels so, The Purge: Anarchy is a rarity. It introduces an entire cast of new characters, with only one carrying over from its predecessor. It also manages expand the universe it exists in without completely ignoring the information presented in the movie before it. And, where the original was more of a locked room thriller, this is almost an action movie more than a horror. The acting is well done, and the characters work well together, something that may or may not have been aided by the fact that Gilford and Sanchez, who play Shane and Liz, are a real-life married couple.

What few special effects there are were done well. This movie had a bigger budget than the original, so they could afford to make the background effects more seamless this time around. There are also several explosions, and a few instances of near-future technology.

If you enjoyed the original, you’re likely to enjoy this movie as well. The storylines are interesting, and it’s interesting to why what for some of the characters were targeted. It also shows how an economic group different from the original handles the annual Purge, and how they attempt to keep themselves safe.

The Purge: Anarchy isn’t available to stream anywhere at the moment, but it can be rented from Redbox or Netflix home delivery service, or purchased from a participating store or on-line retailer.