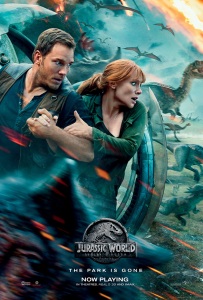 When the volcano on the island of Isla Nublar reactivates and prepares to erupt, the question of what to do with the dinosaurs still living there in the ruins of the Jurassic World Theme park becomes a global debate. Former Park Director Claire Dearing accepts an offer to help rescue several of the species before the island is destroyed. She enlists the help of her ex, and fellow former park employee Owen Grady by telling him that there’s a chance he can rescue Blue, a Velociraptor with whom he had a bond. Shortly after arriving on the island, however, Owen, Claire and their small team learn that the plan to rescue the animals was just a ploy to capture Blue so her genetics can be used in Dr. Wu’s continued dinosaur hybridization project. After barely making it back to the main land, Owen and Claire attempt to enlist an aging Benjamin Lockwood, the former partner of John Hammond, to keep Eli Mills, the man Lockwood hired to be his aide, from selling the dinosaurs to the highest bidder. However, after a dangerous hybrid is accidentally set loose in the mansion, Claire and Owen, along with Lockwood’s granddaughter Maisie, must figure out how to destroy it and stop Eli before either he or the dinosaur can kill them.

The latest entry into the Jurassic Park franchise is serviceable as far as movies go. It’s not anything great, but it’s not the worst of the franchise either. Claire and Owen are the only characters returning from the previous movie, along with a brief appearance by Ian Malcolm from the original Jurassic Park. The acting is on par with the other movies in the series. As is typical with action movies, it’s not great, but not terrible either. No one really stands out as exceptionally good or bad, and the new characters seem to blend well into the Jurassic universe.

For all its faults, Jurassic World is an entertaining movie. The plot may be a little thin, and they retconned John Hammond’s partner in out of nowhere, but aside from that, it shows a side to the possibility of bringing dinosaurs back from the dead that hadn’t really been touched upon in the previous installments, which is selling the creatures as weapons and/or pets. It also delves a little further into the hybridization plan that was introduced in the previous film, and implies that Eli was working with the military to create the living weapons.

Jurassic World: Fallen Kingdom isn’t available to stream anywhere at the moment, but it can be rented from Redbox or Netflix home delivery service, or purchased from a participating store or on-line retailer.