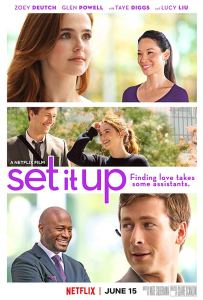 Harper and Charlie, a pair of overworked assistants working in the same office complex, decide to set their bosses up for romance in order to gain a little bit of personal freedom. As their bosses grow more serious, the two spend more and more time together devising schemes to keep their bosses happy and distracted, while also forming an unexpected friendship. This newfound friendship, as well as their respective jobs, however, are compromised when it’s revealed that the motives of one of their bosses isn’t as quite what they originally thought.

Another of Netflix’s recent spate of original-content rom-coms, this one is fairly average. The storyline is a Parent Trap-like scheme, and while the motivations are somewhat understandable, tricking two people into beginning a relationship so you can have more time off is a fairly crap thing to do. The only thing that keeps that aspect from being a complete turnoff is that the bosses aren’t much better people themselves, though one does get a small bit of redemption by the end. The actors playing Harper and Charlie have decent chemistry, and one nice thing is that they initially become friends before realizing they have feelings for each other.

There aren’t any obvious special effects beyond background filler, which isn’t really noticeable.

Anyone who likes rom-coms should enjoy this. As stated before, while the initial setup is done for selfish reasons, it doesn’t detract from the overall enjoyment of the movie. It’s a simple story that’s easy to follow, so you don’t need to remain glued to your seat while watching.

Set It Up is currently only available through Netflix, with no word as to whether or not they plan to release it for purchase.