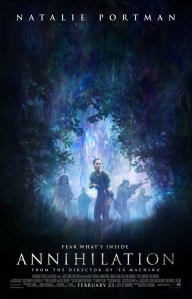 Loosely based on the novel by Jeff VanderMeer, Annihilation follows Lena as she attempts to figure out what happened to her husband when he mysteriously reappears in their home after being missing for nearly a year. When her husband falls ill almost immediately after reappearing in their home, Lena is brought to a military base stationed near an iridescent veil of non-earth origin called The Shimmer, which she learns her husband was exploring when he went missing. Lena, a military-trained biologist, volunteers to explore what’s beyond The Shimmer, and joins a group of four other females, including a psychologist, a surveyor, a linguist, and an anthropologist. Once inside, the group quickly realizes that everything inside The Shimmer is being affected by it, including themselves.

Annihilation is more of a psychological thriller than it is a sci-fi monster movie. You can almost feel the tensions rising as the group goes further into The Shimmer. The actresses all have a decent chemistry and play well off one another. The story remains taught and tense right up to the end, and while the brief flashes to the past and future can be a bit jarring, but they don’t detract from the overall story. As with most psychological thrillers, there isn’t really a specific villain, per se, at least not until the last 15 or so minutes of the movie, and even then you’re not quite sure it’s real. You’ll definitely want to pay attention while watching.

The effects are fantastic. Nearly everything inside The Shimmer posses an otherworldly quality and seems to be a tad bit over saturated. While there aren’t a lot of big explosions or giant creatures, much of the movie has touches of CGI, though I suspect that much of it was achieved through set pieces as well.

If you’re a sci-fi fan or just like intense psychodramas, then this movie is definitely for you. There aren’t a lot of laughs, and the action is low-key, but the powerful, intelligent story keeps viewers interest held until the end, which leave just enough wiggle room that they could make a sequel based on the next book in the series.

Annihilation isn’t available to stream anywhere at the moment, but it can be rented from Redbox or Netflix home delivery service or purchased from a participating store or on-line retailer.