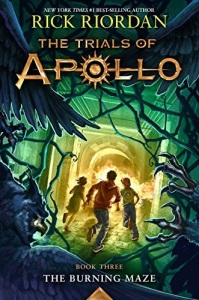 The Trials of Apollo: The Burning Maze

Written By: Rick Riordan
Published: May 2018
Grade: A

The third book of Riordan’s Trials of Apollo series, Lester-as-Apollo, along with his “master” Meg McCaffrey, and Grover Underwood (from the original Percy Jackson series) end up in California, where they enlist the help of Piper McLean and Jason Grace (both from the Heroes of Olympus series) to defeat the third emperor in the Triumvirate.  While there, they learn that part of the Labyrinth has caught fire, and they need to figure out what’s causing it so they can put a stop to the wildfires raging through Southern California.

Riordan once again takes his vast knowledge of history and mythology and makes a compelling, engaging story that holds your attention and makes you wish there was more to read.  Apollo continues his character development, and we get small insights into the previously-established characters as well.  He also gives a tiny history/mythology lesson and drops some interesting and educational trivia without hitting you over the head with it.

As the series continues, Apollo seems to discovering his humanity, as he becomes more and more concerned about those around him, including a new friend he picked up on his journey.  In addition to the established characters mentioned above, there’s also a brief appearance by Leo Valdez, who also first appeared in the Heroes of Olympus series and also played a role in this series’ previous installment, The Dark Prophecy, and we meet new characters in the form of several dryads, or nature spirits, who are taking refuge on the land once owned and cultivated by Meg’s deceased father, all of whom go by the name of their plant type (Joshua Tree, Aloe Vera, Prickly Pear, etc.), and Crest, a pandos, which is a mythological race of furry, big-eared, eight-fingered-and-toed creatures from India which appeared in some ancient Greek literature.

There are still two more books left in this particular series, as is typical with Riordan’s Greek-centered books, so don’t expect everything to be wrapped up by the end.

This book should be available at your local library or through a local or on-line retailer.